In 2 post hoc subgroup analyses of newly diagnosed patients,
TECFIDERA Demonstrated Efficacy at 2 Years That Was Sustained at 6 Years1-4

Gold, et al 2015 Study Design: A 2-year, integrated post hoc subgroup analysis, including the intent-to-treat population of DEFINE and CONFIRM, assessed the efficacy and safety of TECFIDERA in 678 patients newly diagnosed with RMS within 1 year prior to the study who had not been previously treated with a disease-modifying therapy. Data were collected from the primary and additional efficacy endpoints and incidence of AEs in the two pivotal phase 3 trials, DEFINE and CONFIRM.

Limitations: Post hoc analysis results should be interpreted with caution. Study was not designed in advance to analyze endpoints in the subgroup of newly diagnosed patients.

TECFIDERA demonstrated a reduction in ARR at 2 years vs placebo1*

TECFIDERA reduced the risk of relapse at 2 years vs placebo

*ARR was calculated using a negative binomial regression model adjusted for baseline EDSS score (≤2.0 vs >2.0), baseline age (<40 vs ≥40 years), study, region, and number of relapses in the 1 year prior to DEFINE/CONFIRM study entry. 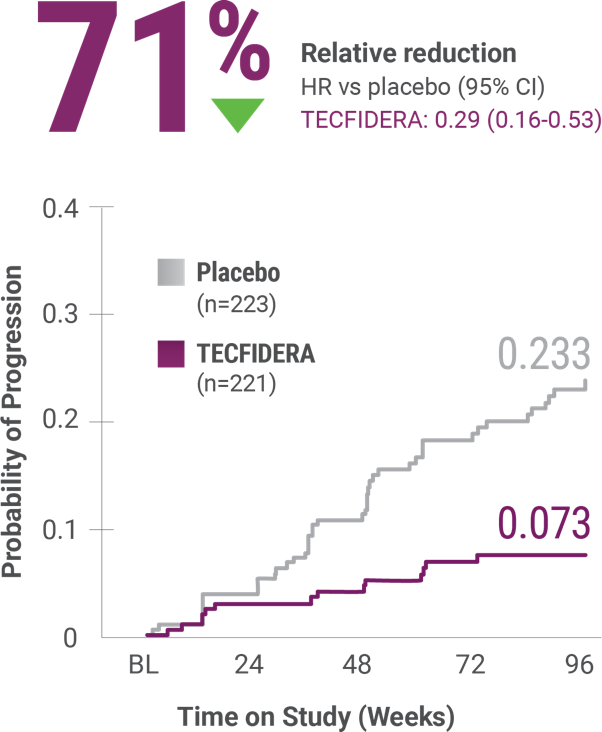 †Estimated proportion of patients with disability progression at week 96 was derived using Kaplan-Meier analysis. HR, 95% CI, and P value were based on a stratified Cox proportional hazards model with study as the stratifying variable, adjusted for baseline EDSS score (as a continuous variable), baseline age (<40 vs ≥40), and region.

Gold, et al 2016 Study Design: A post hoc, subgroup, multicenter, parallel-group, randomized, dose-comparison analysis of the 6-year interim integrated data from the extension study, ENDORSE, as well as the two pivotal, phase 3 clinical trials, DEFINE and CONFIRM, assessed the long-term efficacy of TECFIDERA in a subset of 229 newly diagnosed patients with RMS with 6-year minimum follow-up. Patients were considered newly diagnosed with RMS according to the McDonald criteria within 1 year prior to entry into DEFINE and CONFIRM, and were either treatment naive or previously treated with corticosteroids. Enrollment in ENDORSE was at week 96, the last visit of the parent trial and the baseline visit for the extension. 144 newly diagnosed patients received continuous TECFIDERA treatment in DEFINE/CONFIRM and ENDORSE. 85 newly diagnosed patients received placebo for 2 years in DEFINE/CONFIRM, followed by 4 years of TECFIDERA in ENDORSE. The primary objective of ENDORSE was to evaluate the long-term safety of TECFIDERA in RMS.

Limitations: ENDORSE is an open-label extension study. This is a post hoc analysis in which efficacy was a secondary objective. The newly diagnosed subgroup was limited by the small sample size. There may be bias due to the disproportionate discontinuation of patients experiencing AEs or suboptimal efficacy during the extension period, or because not all patients who completed the DEFINE or CONFIRM trials chose to enroll in ENDORSE. These are interim data of an ongoing study. Results are subject to change until study is completed.

TECFIDERA demonstrated a sustained reduction in ARR at 6 years2*†